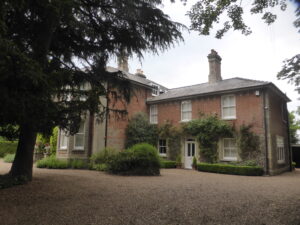 Lincoln Lodge, with the old surgery wing of the house in the foreground; there used to be dense planting on the left separating the house driveway from the surgery entrance; the brass plaque below was on the gate post at the entrance from where this photograph was taken (see below or click image for source and acknowledgements etc., ref. Image 1).

Lincoln Lodge is a large old Victorian house in Rayes Lane, Newmarket (see image on the right). It became a surgery in 1936, when Dr Norman Simpson moved his practice there from Heath Cottage. He lived and worked from Lincoln Lodge until 1945/6, then moved to Wesley Waterless for a year or two, before moving away from the area completely in 1948. Dr Ian MacKenzie seems to have moved into Lincoln Lodge as Dr Simpson moved out; he was certainly there by 1947 and is known to have bought the practice before the 1948 advent of the National Health Service (NHS). It’s not entirely clear whether Drs Simpson and MacKenzie worked together for a year or two before Dr Simpson moved away; it seems most likely that they did. Interestingly the MacKenzies didn’t buy the actual house until 1948, by which time Dr Simpson was living in Lancashire.

A fascinating hand written note with plans (see the references below), describes how in 1948 alterations had to be made to the surgery part of the house because the new NHS resulted in more patients coming for appointments, so the size of the waiting room was increased. The note also provides interesting insights into the working day of a GP pre 1948, which was mainly taken up by a large number of home visits.

From the mid 1960s Dr MacKenzie was joined in partnership by a Dr Hamilton until 1970. In the early 1970s Drs Grahame, Calvert, Bailey then Frost joined in quick succession as Dr MacKenzie tailed off before retirement. It was Drs Calvert, Bailey and Frost who moved the practice to Exning Road in 1974. Their practice (as many will know) evolved into the Orchard House Surgery of today (see the page on Exning Road Surgery for the next stage, and The Orchard House practice chain). It’s of interest that at the time of writing, Dr Bailey, who retired in 2018, still lived in Lincoln Lodge, which he bought from the MacKenzies in 1979.

Throughout the time that Lincoln Lodge was a surgery, what was to become Oakfield Surgery was known as Rous Surgery at Rous Villa in Rous Road, but it’s of note that Dr Davis moved that practice to Rous Villa the same year that Dr Simpson moved his to Lincoln Lodge. The forerunner of today’s The Rookery Medical Centre had been at Alton House in the High Street for a decade already when the Heath Cottage practice moved to Lincoln Lodge, but it’s also of note that Alton House Surgery moved to The Rookery Medical Centre in 1974, the same year that the Lincoln Lodge practice moved to Exning Road).

The old brass plaque from outside Lincoln Lodge (see below or click image for source and acknowledgements etc., ref. Image 2).

* The first female doctor in this practice chain (see The Orchard House practice chain), but not the first in Newmarket, who was Dr Cochrane at Alton House Surgery in 1952.

** But note, at the time of writing still lived in Lincoln Lodge.

Image 1: Photograph taken in 2019, by the author of talkingdust.net, taken and used here with kind permission of the owners of Lincoln Lodge, 2019.

Image 2: Photograph taken in 2018, by the author of talkingdust.net, taken and used here with kind permission of the owners of the sign, 2019.

Image 3: From private papers (cropped); images reproduced with kind permission of the owners of Lincoln Lodge, 2019. [Note: this is in the references below.]

1936, 10th December: Conveyance of Lincoln Lodge from Mrs Edith Collin to ‘Norman Charles Simpson of Heath Cottage… Doctor of Medicine (hereinafter called the Purchaser)’, and later in the document Lincoln Lodge with offices etc., described as ‘now in the occupation of the purchaser’ suggesting that he had already moved in, perhaps initially as a tenant. Reference: The Deeds of Lincoln Lodge, kindly lent to me in 2018 by the then owners, the Baileys. [Note: Edith Collin is described as of Raylands, Rayes Lane, which is further up the lane, so Walter Earl in the reference above would have been the tenant before Norman Simpson, who therefore must have been a tenant before purchasing for only a short time. The deeds indicate that Edith Collin had owned the house for many years.]

1946: ‘SIMPSON, Norman Charles, Underwood Hall, Westley, Newmarket, Suffolk (Tel. Stetchworth 298) – M.D. Aberd. (Hnrs.) 1927, M.B., Ch.B. 1921; (Aberd.); Mem. Camb. Med. Soc.’ Reference: The Medical Directory. London: Churchill; 1946. [Note: this was the first year that he mentioned Wesley, having been in Lincoln Lodge until 1945 – the Medical Registers show the same, as do both in 1947. The Medical Register shows him still in Westley in 1948, but the Medical Directory shows that he had moved on to Lancashire by that stage – see the page on Norman Charles Simpson for more details.]

1946, 16th November: It was reported in the Newmarket press that Dr Norman Simpson had been appointed to cover an STD role on a sessional basis for the local County Councils until the New Year, from which point a specialist would be taking on the role. Reference: The Newmarket Journal. Saturday Nov 16 1946: 13. [Note: this supports the impression that he continued working in practice at Newmarket until he finally left some time in 1947, Dr MacKenzie having moved into the practice building some time during 1946 (see 1947 below).]

1947: ‘MacKENZIE, Ian Kennedy, Lincoln Lodge, New-market, Suff. – M.B., Ch.B. Ed. 1934.’ Reference: The Medical Directory. London: Churchill; 1947. [Note: in 1946 the Directory records him in the forces section as a Flight Lieutenant in the RAF, and the Medical Register for that year gives his address as ‘c/o/ Lloyd’s Bank, 6, Pall Mall, London’. Like the Directory, the Register records him in Lincoln Lodge by 1947.] 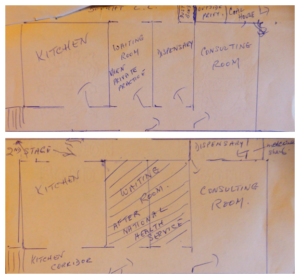 Hand drawn plans of the old surgery area in the house, pre-NHS layout above, new NHS layout below (see above or click image for source and acknowledgements etc., ref. Image 3).

1979: A hand written document (with sketches – see image on the right), for Dr Bailey by Dr MacKenzie’s wife in 1979, which shows the history of the layout in the small surgery on the ground floor of the west wing of Lincoln Lodge. Initially there was a sequence of three rooms: waiting room, dispensary then consulting room. Then, after the advent of the NHS, the waiting room and dispensary were knocked together to form a larger waiting room, the same size as the consulting room, and a small dispensary made at the back of the consulting room from an outside privy and coal house (with access to the dispensary from the consulting room – apparently a small internal porch associated with this could also be accessed from the outside, and patients collected their own medicines from the ‘medicine shelf’ in that marked on the plan). She writes ‘In our early days the small waiting room was adequate as very few people came to the surgery – when we bought the practice it was a private practice with only about 500 on the panel & patients were visited in those days – on average about 20 to 25 patients were visited daily. / Then after national health came we had to enlarge the waiting room’. After ‘18 years’ the waiting room was divided in two again, to make an extra consulting room, which seems to coincide roughly with Dr Hamilton’s arrival. At the time of these later 1960s alterations, part of the neighbouring kitchen was taken over ‘for the receptionist and files.’ Reference: Note kept with the deeds of Lincoln Lodge, kindly lent to me and explained in 2018 by the then owners, the Baileys (who bought Lincoln Lodge from the MacKenzies in 1979).

2018, 31st May: A full page article in the Newmarket Journal on the retirement of Dr Simon Bailey, with an outline of changes during his career, including the move from Lincoln Lodge to Exning Road Surgery. Reference: The Newmarket Journal. Thursday May 31 2018: 3.

Personal correspondence and discussion with those who have living memory of Lincoln Lodge Surgery, including with a doctor at Orchard House Surgery in 2014 whose patient aged 79 had living memory of Dr Simpson preceding Dr MacKenzie in the practice (she would have been about 12 when he left Newmarket). [Note: there has been some suggestion (from two sources) that there was a Dr Alderman (or something that sounds like Alderman) associated with the Lincoln Lodge practice in about the 1940s, although no further evidence for this has yet come to light through the Medical Directories or Registers etc. – if anyone has more information please make contact using the details via the footer below.]