Heath cottage was the home and surgery of John Hansby Maund followed by Norman Charles Simpson, from the mid 1920s until 1936. Dr Maund moved his practice from Grosvenor House to Heath Cottage some time between 1922 and 1926. He left in 1931/2 to become a ship’s surgeon, and was succeeded by Dr Simpson. The latter moved the practice from Heath Cottage to Lincoln Lodge in 1936. They were both part of a chain of medics that became the Orchard House Surgery of today (see The Orchard House practice chain for details, and the pages on John Hansby Maund and Norman Charles Simpson). 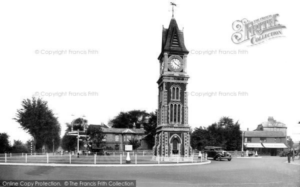 Heath Cottage is visible in the background of this old photograph from 1938 (just a couple of years after it ceased to be a surgery), the long building just to the left of the base of the clock tower, behind the roundabout. It’s also of not that Cheveley House was gone by this stage – see the page on Cheveley House (see below or click image for more on the source and acknowledgements etc., ref. Image 1).

Heath Cottage no longer exists. It stood on the southern side of Bury Road, a short distance up from the clock tower roundabout, as shown in the image on the right taken shortly after the practice had moved to Lincoln Lodge. It’s the building in the background, to the left of the clock tower. The green area in front is where the Majestic Wine Warehouse stands now. In fact where Heath Cottage stood is now the driveway into the Majestic Wine Warehouse.

Note: Heath Cottage can also be seen in a picture on the page about Cheveley House.

Note also, on this website the clock tower is known unofficially as the Robert Fyson retirement clock!

1931, 24th August: Dr J. H. Maund (Medical Officer) present at a meeting of the Newmarket Urban District Council. Reference: The Bury Free Press. Saturday Aug 29 1931: 4. [Note: this is the last mention found so far of Dr Maund still in practice at Newmarket, although there is a report regarding an inquest held at Newmarket Police station on September 18th at which he was present, regarding a case from 1st August; likely he was still working in Newmarket then, but might have come back for the inquest. Reference: The Bury Free Press. Saturday Sept 19 1931: 12, but note also the May 1832 reference below.]

1931, 17th October: A report from the West Suffolk Insurance Committee quarterly meeting, regarding the quarterly report of the Medical Benefit Sub-Committee, stated that Dr N. C. Simpson of Newmarket had been added to the panel list and Dr J. H. Maund removed. Reference: The Bury Free Press. Saturday Oct 17 1931: 11. [Note: this would imply that Dr Simpson replaced Dr Maund at Heath Cottage during this quarter of 1931, which fits with the report at the time of his death in 1944 below that the latter left in 1931, but see 1932 below.]

1931, 6th December: The earliest mention found so far of ‘Dr. Simpson, practising at Newmarket’ after the October note above. He was mentioned as a witness in a drink-driving case. Reference: The Bury Free Press. Saturday Dec 12 1931: 4. [Note: the report also mentions a ‘Dr. W. F. Davis’ of Newmarket giving an opposing opinion, which appears to be a reporting error for Joe Davis.]

1932, 28th May: A report on some West Suffolk County Council meetings noted that ‘Dr. J. H. Maund, of Heath Cottage, Newmarket tendered his resignation through ill-health as District Medical Officer for the 1st New-market District and as Medical Officer for the Newmarket Institution, and Dr. Nor-man Charles Simpson, of Heath Cottage Newmarket, applied for the posts’, which he obtained. Reference: The Bury Free Press. Saturday May 28 1932: 12. [Note: it’s odd that ‘ill health’ was given as the reason, given that he left to become a ship’s surgeon according to the 1944 reference below, unless that was a lighter semi retirement role ‘travelling’ – see 1933 below?], [Note also, this seems to show Dr Maund working in Newmarket a little later than some of the other references suggest, perhaps suggesting an overlap with Dr Simpson for a few months, as is seen with many other similar examples elsewhere on this website.]

1936, 10th December: Conveyance of Lincoln Lodge from Mrs Edith Collin to ‘Norman Charles Simpson of Heath Cottage… Doctor of Medicine (hereinafter called the Purchaser)’, and later in the document Lincoln Lodge with offices etc., described as ‘now in the occupation of the purchaser’ suggesting that he had already moved in, perhaps initially as a tenant. Reference: The Deeds of Lincoln Lodge, kindly lent to me in 2018 by the then owners, the Baileys. [Note: see the page on Lincoln Lodge for more details.]

1944, 28th August: Date of death of John Hansby Maund reported in the Newmarket Journal. The report also mentions that he died near St Albans in Hertfordshire, aged 80, that he’d been in practice at Newmarket for 37 years, but ‘left in 1931 to become a ship’s surgeon’. It mentions Heath Cottage too. Reference: The Newmarket Journal. Saturday Sept 9 1944: 5. [Note: see the page on John Hansby Maund for more details.]

Shops History Newmarket. http://www.newmarketshops.info/index.html. [Note: newmarketshops.info has been supplied with information regarding the medical history of Newmarket by the author of talkingdust.net since August 2013 (see footnotes on some of the pages). Both websites continue to be developed, and in this sense are mutually symbiotic.]