This website is about the medical history of Newmarket, a small town on the Suffolk/Cambridgeshire border, England, best known for horse racing. It shows how the history of medicine unfolded in the town, but in so doing also illustrates how medicine developed more generally, especially in English provincial towns (scroll down or click here for a summary in one paragraph!). 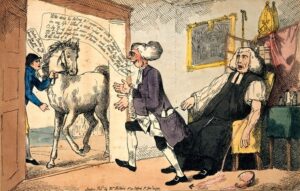 An 18th century medic distracted by a horse whilst blood-letting a patient (see below or click image for source and acknowledgements etc., ref. Image 1).

The information collected together on this website, presented and discussed, might be of interest to Newmarket medics past or present, medical historians, family historians whose medical ancestors had links with the town, local historians, or any Newmarket and district residents. It might even be of interest to others more widely who are fascinated by historical things in general, especially when told from the perspective of the ordinary and obscure, i.e. people just like most of us, who nevertheless often lead interesting lives that have something to say – see the p.s. below. Too often history is told from the perspective of an influential/powerful minority, losing little gems like William Sandiver 2’s daughter Elizabeth, the fascinating life of Susan Hamerton Greene, and many others like them who are brought to life on this website.

The links below (and similarly named navigation above, on each page), provide access to the information in various ways. Explaining them in order:-

The ‘Chronicle’ navigation lists some of the key and interesting events from Newmarket’s medical history, in chronological order, with links to further details. It might be a good place to start.

The ‘Topics’ navigation is a page with further links that approach the medical history of Newmarket from the perspective of various topics. The practice chains of Newmarket is a particularly interesting topic. Tracing a chain of succession is how this project began. It all started in 2013 tracing The Rookery Medical Centre, which arose from Alton House Surgery, back to the Gray family’s practice and ultimately, via a series of linked practices, all the way back to the early 18th century, perhaps even earlier. Other topics include The medical families of Newmarket (which might especially be of interest to anyone tracing their family tree who stumbles across this website), and The history of medical treatments, training, qualifications and regulation illustrated by Newmarket examples (a huge page cross linking to the whole website). There are also pages written from the perspective of the fascinating poor laws, plague and smallpox.

The ‘Places’ navigation accesses the information via particular buildings/locations in the town. It became obvious as the research progressed that certain locations in Newmarket have a history of use for medical purposes, in several cases buildings being occupied by different practices at different times.

The ‘People’ navigation is an index of names. Clicking on some of the key names from the past links to a page devoted to that specific individual. For others the links lead simply to the main page on which that individual features. Links to further pages relevant to the various individuals can be found from their main linked page (or via the search feature – see below).

The ‘Search’ navigation can be used to search the whole website, although with many individuals or places having the same or similar names, and also being mentioned briefly on lots of pages, it’s perhaps not the best place to start. Also, it seems to cope better with single word searches.

Obviously the amount of historical data available increases exponentially as time nears the present, so necessarily this website is increasingly selective regarding what’s been included over time. Everything is included that’s come to light from the 17th century and earlier, most things from the 18th century, and a large number of finds from the 19th century, although increasingly thinned out. The site then becomes very selective, especially after about 1950, from which point only information of particular significance or interest is documented, for the record and to bring things up to date.

A summary of Newmarket’s medical history in one paragraph!

(illustrated by the diagram below):- 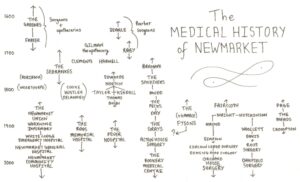 A diagram illustrating the medical history of Newmarket, emphasising the connections between institutions and individuals over time (see below or click image for source and acknowledgements etc., ref. Image 2).

It’s thought that people have lived in the Newmarket area further back than recorded history, but the town is named after a new market that emerged in the 13th century. Even so, it remained a small place whose population was no more than a few hundred people until the late 16th / early 17th century. Before then it was probably too small to sustain a resident medic, so likely was served by those with local folk knowledge and medics from neighbouring larger towns. Henry Veesy of Cambridge was perhaps one such example in the early 16th century. Newmarket’s first resident medics appear to have been the 16th/17th century Greene family, a family of surgeons and apothecaries, who provided medical services over four generations, alongside a few others as the town began to expand with the start of royal patronage and horse racing (including the barber-surgeons Nicholas Searle and William Raby). The 18th century saw two further notable medical families, the Searanckes and the Sandivers, who became classic 18th century surgeon-apothecaries. The latter were part of a chain of medics with links to The Rookery Medical Centre of today. Parallel to this proto-Rookery, the 19th century began with the development of an unusually large for the time triple partnership called Norton, Taylor and Kendall, with roots going back into the 18th century. However, that practice was decimated by the death of all concerned by 1839, and essentially replaced by three unconnected single-handed practices that had started up alongside in the 1830s. One of these diverged in about 1883/4, eventually resulting in today’s Oakfield and Orchard House surgeries. These four practices (proto-Rookery, proto-Oakfield/Orchard House and two others) served the town throughout the 19th century. Two of the 19th century practices died out in the early 20th century with the death of the single-handed GPs running them at the time, their caseloads seemingly being absorbed within the practices that remained – especially one (the Fysons’) was likely incorporated into the expanding proto-Rookery. The majority of the 20th century was served by the three practices remaining that became The Rookery Medical Centre, Oakfield Surgery and Orchard House Surgery. Alongside these practices runs the story of the hospitals. The poor law functions and workhouses of St Mary’s and All Saints’ united in 1835 (with others from the surrounding area) to form the Newmarket Union and Workhouse, with its infirmary at the workhouse up Exning Road. The Rous Memorial Hospital (a local cottage hospital) was built in 1879/80, and there was a fever hospital up Fordham Road as well from 1889. The workhouse and associated infirmary were transformed during the Second World War into the White Lodge emergency hospital. Up until that point the medical services for Newmarket had been provided largely by doctors from the practices, the local generalist medics covering even the hospitals. After the war the emergency hospital evolved into Newmarket General Hospital, staffed by specialists. That closed in 1992, and the Community Hospital of today was built on the site (actually next door to the old workhouse building, which still survives as housing).

Hopefully there will be some readers out there who find this website interesting, perhaps even useful. If anyone has any corrections / potential additions, please send a message using the contact details via the footer of each page (the email address provided there is used exclusively for issues relating to talkingdust.net). Part of the reason for putting this information on a website rather than in a published book is so that it can be further refined and developed, including as a result of contact from others whose areas of interest/research overlap. Also, the web and its search engines will likely ensure a wider reach than a printed book could achieve, which might easily just sit on local shelves unknown to those further afield who might find the information presented of interest.

Image 2: Diagram drawn in 2019, by the author of talkingdust.net.