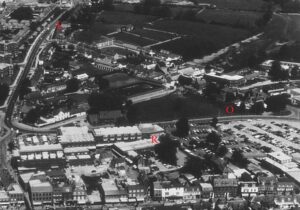 This fascinating aerial view, showing north of Newmarket High Street in the mid to late 1970s, captures several interesting features from a Newmarket medical history point of view: ‘E’ marks Exning Road Surgery, whist it was a surgery; ‘O’ marks the future site of Orchard House Surgery, where the former was to move, showing a small cluster of trees that likely represents the orchard after which it was named; ‘R’ marks The Rookery Medical Centre when newly built, the surgery and the shopping centre both covering a much smaller area than today (see below or click image for source and acknowledgements etc., ref. Image 1).

Drs Calvert, Bailey and Frost, all quite new to the practice, moved Lincoln Lodge Surgery to a house in Exning Road in 1974 (number 2). The practice remained there until 1984, when it moved to purpose built premises and became today’s Orchard House Surgery (see The Orchard House practice chain for the full history behind this chain of Newmarket medics). The house in Exning Road was a private residence before 1974 and has reverted back to that use since.

During the time of Exning Road Surgery this practice started to develop more into the team that characterises primary care today.

Regarding the other practices in town at that time, Alton House Surgery moved to The Rookery Medical Centre the same year that the Lincoln Lodge practice moved to Exning Road (see the pages on Alton House Surgery, The Rookery Medical Centre and The Rookery practice chain for more details). What was to become Oakfield Surgery was in Rous Villa during the decade of Exning Road Surgery (see the pages on Rous Surgery and The Oakfield practice chain for more details).

Note: the aerial photograph on the page about Newmarket Hospital from 1963 also notes the house that was later to become Exning Road Surgery.

Image 1: From Peter Norman’s Collection (cropped – red annotations mine); image reproduced with kind permission of Peter Norman. [Note: despite making appropriate enquiries we have not been able to ascertain the origins of this aerial photograph, but using and commenting on a significantly cropped and annotated version of it here seems likely acceptable. Please make contact using the details via the footer below if you know more, for example if further acknowledgements etc. are required, and perhaps to supply a higher resolution version, which might show more interesting details?]

2018, 31st May: A full page article in the Newmarket Journal on the retirement of Dr Simon Bailey, with an outline of changes during his career, including the Exning Road days, and the moves from Lincoln Lodge and to Orchard House. Reference: The Newmarket Journal. Thursday May 31 2018: 3.

Personal correspondence and discussion with those who have living memory of Exning Road Surgery.