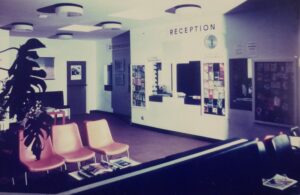 An early picture of The Rookery waiting room, reception and dispensary – note the dispensary was in the same place that it is now, the dark brown doorway here is the light brown doorway in the image below, but the reception is now behind where the picture below was taken (see below or click image for source and acknowledgements etc., ref. Image 1).

The¶ Rookery Medical Centre came into being when Alton House Surgery moved into The Rookery shopping centre in October 1974. The precinct, as the shopping complex was then described, was not officially opened until March 1975, but by January 1975 two units had been opened, one of which was the ‘health centre’. Since 2010 the shopping complex has been called The Guineas, but the part occupied by the surgery and various other businesses is still called Rookery House today. Interestingly, the name ‘Rookery’ for this part of town goes back much further than the 1970s shopping centre, in fact as far as the early 19th century at least. The name can be seen on the earliest census of 1841, and it appears in historical records even earlier than that (see the 1836 reference below). It’s also of interest that The Rookery Medical Centre is not the first medical premises to have been in this part of town either. In fact the earliest known location for a medical premises in Newmarket was that of Gilman the apothecary in the late 17th century, who had a shop in Drapery Row, which is now essentially a back service road for part of The Guineas (see the page on Gilman the apothecary for details). Even before that, earlier forms of medic likely had a presence in this part of town, where the original market was held (see Henry Veesys etc. – medical care before the 17th century for details).

The six GPs who made the move from Alton House to The Rookery in 1974 were Drs McNeill, Walker, Dossetor, Wallace, Baxter and Wiggins. The chart below records all of the partners and employed doctors who have worked at the surgery since then (it does not include the many GP trainees/‘registrars’ and various locums who have worked at the practice – the line has to be drawn somewhere!). Obviously there have been and are a large number of nursing, dispensary, reception and various forms of administrative staff working at the practice too. This has been an increasing feature over the decades and a snapshot in October 2017 showed 40 staff employed at the practice aside from the doctors. The role of Practice Manager has evolved during this time. The first person who could be defined as a manager for the practice was Nel Howden, who worked at Alton House, initially in the dispensary. She was succeeded by Hilda Noble in 1973 who therefore came to The Rookery as Practice Manager in 1974. She retired in 1985, being replaced by Jean Bucknell (1985-1991). Then came Jane Taylor (1991-2009) followed by Scott Burley (2009-date). 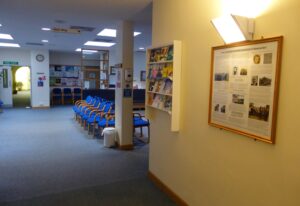 The main waiting room taken from the corridor leading to reception in 2013, with the newly installed history poster from the start of this research on the right (see below or click image for source and acknowledgements etc., ref. Image 2).

The surgery has slowly continued to expand over the years, including acquiring extra space in the Rookery House building. In 1997 it extended into what was named the Alton Wing, after the old surgery building (no-one appears to have been aware at the time that further back the name Alton originally had come from the Gray family’s origins in Hampshire). How unaware we can be of the history all around us – in that regard it’s also of interest that the lovely waiting room mural was painted in 1999.

One noticeable feature in the chart below is that everyone was a partner until 2004, then increasingly the doctors have been employed, the number of partners steadily reducing. The way that general practice was funded changed in 2004 triggering that development. When this change happened not many people seemed to realise that employed doctors were quite common historically (for example see the page on Clement Frederick Gray earlier in The Rookery practice chain), and like in earlier times they have a tendency to move on sooner, often to become partners elsewhere – it can also be a handy way to step down before moving on.

A photograph taken in 2011, during an event at the Jockey Club to mark the retirement of Dr Longman and emigration of Dr Yull, showing 17 Rookery GPs from that time or earlier, from left to right: Drs Kumar (Sriskandan), Saban, Slowe, Yull, Phillips, Wiggins, Abel, White, Ramsay, Knowles, Wace, Longman (Orrow above and Strobridge below – registrars / GPs in training at the time, the latter interestingly a granddaughter of Dr Dossetor), Jackson, Baxter and Dossetor (see below or click image for source and acknowledgements etc., ref. Image 3).

** Not to be confused with Dr Kumar Sriskandan (known as Dr Kumar) above.

Note: some of the above were trainees/registrars before becoming employees or partners, but the dates refer only to their time as an employee or partner.

Image 2: Photograph taken in 2013, by the author of talkingdust.net.

1836, 10th May: The parish of Newmarket St Mary as part of the Newmarket Union applied to the poor law commissioners to sell various properties, including, ‘two double cottages situate in the Rookery or Diddery’. Reference: an image of the original document in the research notes of Peter May, HD1584, (Suffolk County Record Office, Bury St Edmunds), which he appears to have obtained from the National Archives at Kew, referencing it as PRO (Kew) MH12/1684. [Note: fortunately the name Rookery stuck, so this did not become ‘The Diddery Medical Centre’!]

1874, 4th August: ‘that quarter of our town which, from its close narrow alleys and squalid tenements, is so well fitted to be the hotbed of every disease – the Rookery’! Reference: Article entitled ‘THE SMALL POX.’ by ‘J.D.’, The Newmarket St Mary’s Parish Magazine, September 1874.

1974, 28th October: Under a small heading ‘On the move’ it was reported that ‘From next Monday, the practice of Dr. J. L. McNeill and partners will be at new premises on the Rookery. The practice, which involves six doctors, has been at Alton House, High Street, New-market, for many years.’ Reference: The Newmarket Journal. Thursday Oct 24 1974: 40 (i.e. the back page).

1975, 23rd January: An article on the new shopping centre in The Rookery reported ‘Two units in the precinct – the health centre and a furni-ture shop – are already open.’ Reference: The Newmarket Journal. Thursday Jan 23 1975: 1.

1997, 2nd May: The official opening of the Alton Wing reported in the paper the day before the event. Reference: The Newmarket Journal. Thursday May 1 1997: 8.

Personal correspondence and discussion with those who have living memory of The Rookery Medical Centre, including doctors, staff and patients.