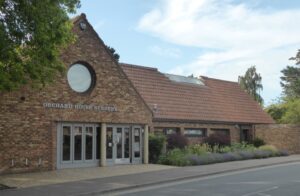 The front of Orchard House Surgery in 2019 (see below or click image for source and acknowledgements etc., ref. Image 1).

Orchard House Surgery (see image on the right) came into being when Exning Road Surgery moved to new purpose built premises on Fred Archer Way in 1984 (see also The Orchard House practice chain). A large extension was built in 1992, accessed down a corridor from the back of the main entrance building. The name Orchard House was chosen because apparently there was an orchard on the site before the surgery was built (the Orchard being part of Geoff Barling’s Primrose Cottage Stables, hence Barling’s Court residential home built next door) – see the page on Exning Road Surgery for an aerial photograph that appears to show some trees that likely represent the orchard.

The three GPs who made the move from Exning Road Surgery to Orchard House were Drs Calvert, Bailey and Doggett (the latter now named McLaren). The chart below records all of the partners and employed doctors who have worked at the surgery since (it does not include the many GP trainees / ‘registrars’ and various locums who have worked at the practice – the line has to be drawn somewhere). Obviously there have been and are a large number of nursing, dispensary, reception and various forms of administrative staff working at the practice too. This has been an increasing feature over the decades. The role of Practice Manager has evolved during this time. The first person who could be defined as a manager for the practice was Sandy Squire in the 1980s, who evolved into the role having started as a receptionist.

(One noticeable feature of the chart below is that everyone was a partner until 2004, then increasingly the doctors have been employed, the number of partners steadily reducing. The way general practice was funded changed in 2004 making this possible.)

Note: some of the above were trainees / registrars before becoming employees or partners, but the dates refer only to their time as an employee or partner.

Image 1: Photograph taken in 2019, by the author of talkingdust.net.

2018, 31st May: A full page article in the Newmarket Journal on the retirement of Dr Simon Bailey, with an outline of changes during his career, including the move from Exning Road Surgery to Orchard House and expansion of the practice. Reference: The Newmarket Journal. Thursday May 31 2018: 3.

Personal correspondence and discussion with those who have living memory of Orchard House Surgery, including doctors, staff and patients.