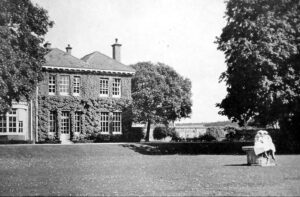 Oakfield House, after which the surgery was named, taken from roughly where the original surgery stood (see below or click image for source and acknowledgements etc., ref. Image 1).

The original Oakfield Surgery (see image below) came into being when Rous Surgery moved to new purpose built premises on Vicarage Road in May 1993 (see also The Oakfield practice chain). Its name comes from Oakfield House, which was on the site before the surgery was built (see image on the right, and map on the page about Rous Villa). This big old house had for many years been a nurses’ home associated with Newmarket General Hospital (note two nurses are visible in the image on the right, sitting in the grounds).

The three GPs who made the move from Rous Surgery were Drs White, Arthur and Silverston. Dr White retired the following year. 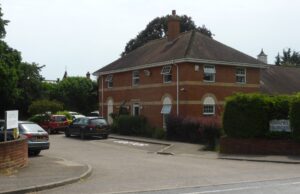 Entrance to the original Oakfield Surgery in 2019 (see below or click image for source and acknowledgements etc., ref. Image 2).

After nearly 17 years at Vicarage Road, this practice moved to the Newmarket Hospital site on 23rd March 2020, working out of rooms in the hospital until their new building at the back became ready a few months later (during the COVID-19 coronavirus pandemic!). They started working from the new building on 6th July (see images below). Interestingly, the practice retained the name Oakfield Surgery, which is partly why there isn’t a new page from this point on this website. It’s the first example in the medical history of Newmarket of a practice moving but retaining the name of its old building. For example, The Rookery Medical Centre acquired its name after moving to The Rookery shopping centre in 1974, likewise Orchard House Surgery on moving to its current location in 1984, and even Oakfield Surgery itself was called Rous Surgery before moving to the old Oakfield House site in 1984, as described above. The practice might have changed its name to White Lodge Surgery with the move (a name long associated with the hospital site – see the page on Newmarket Hospital for details). However, as mentioned above, the original Oakfield House did have some links with the old Newmarket General Hospital, so it’s nice that this historical connection has been restored. 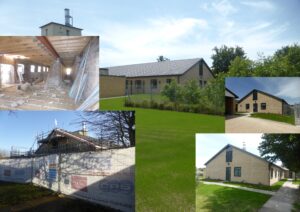 The new surgery at the back of Newmarket Hospital, shortly before it opened in 2020, viewed from either side (inserts on the right) and whilst under construction (inserts on the left) – the bottom two inserts are views taken from the X-ray department side, from roughly the same position, the top two from the other side; note the screen says ‘Newmarket Hospital Oakfield’ at the bottom; the surgery building is accessed by walking through from the main hospital front entrance during normal working hours, but via the non-X-ray side out of hours (see below or click image for source and acknowledgements etc., ref. Image 3).

The charts below record all of the partners and employed doctors who have worked at the practice since 1993, with a division to mark the move, instead of a full new page (the list does not include any trainee GPs / ‘registrars’ or various locums who have worked there – the line has to be drawn somewhere). Obviously there have been and are a large number of nursing, dispensary, reception and various forms of administrative staff working at the practice too. This has been an increasing feature over the decades. Also during that time the role of Practice Manager has evolved, the first for this practice being Zena Cornell, who actually started at Rous Surgery in 1987, and who was still in the role at the time of the move to Newmarket Hospital, but her title changing to ‘Operations Manager’ during that period.

The doctors who worked at the original Vicarage Road building between 1993 and 2020:-

* Left the partnership at the end of 2019, but continued to do some locum sessions for the practice into 2020.

Since the move to the Newmarket Hospital site in 2020:-

**** Started after the move to the new building.

Image 2: Photograph taken in 2019, by the author of talkingdust.net.

Image 3: Photographs taken in 2020, by the author of talkingdust.net.

Image 4: From a private collection; image ©, reproduced with kind permission of Zena Cornell. [Note: this is in the references below.] 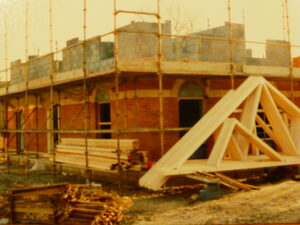 The original Oakfield Surgery under construction (see above or click image for source and acknowledgements etc., ref. Image 4).

1993, 1st May: Report in ‘The Journal’ regarding a tree planting ceremony that took place on Saturday 1st May to mark the official opening of the original Oakfield Surgery, including the comment, ‘the town’s Rous Road surgery – which has now moved to the purpose-built premises in Vicarage Road’. The article includes a picture of the tree planting with the surgery’s GPs, who were Drs Arthur, Silverston, White and Griffiths. Reference: The Newmarket Journal. Thursday May 6 1993: 1. [Note: Dr Griffiths had not actually started work for the surgery at this point; she started on 12th May, but obviously was included in the ceremony], [Note also, oddly the title of this article is ‘Hospital campaigner has VIP role as surgery opens’ emphasising the VIP hospital campaigner more than the surgery opening. The future of Newmarket Hospital was a hot topic at the time, hence this emphasis – see the page on Newmarket Hospital for more details.]

Personal correspondence and discussion with those who have living memory of Oakfield Surgery, including doctors, staff and patients.