This chain is not quite the same as the other practice chains, in that there is no specific evidence regarding continuity of practice, aside from the not unreasonable assumption that an apparent four generation family of Greenes, all medics, quite likely involved some form of continuity. The details regarding the family structure are explained on the page about The Greenes. There the focus is on the family structure, but here it’s on the implications of that with regards to likely continuity of practice. There is also a lot more detail regarding each individual on the pages about Richard Greene, Robert Greene, Francis Greene, Lambert Greene and Thomas Fraser respectively.

We know for certain that Lambert Greene the apothecary was the step son of Francis Greene the apothecary. Clearly Lambert would have been trained by his step father and continued his practice after Francis’s death in 1674, until his own death in 1678. Thomas Fraser (Francis Greene’s son in law and Lambert’s step brother in law) called himself a chirurgian/surgeon. It’s likely he came to Newmarket already trained in 1676, when he married Francis Greene’s daughter Susan (he was described as from Whitehall then), and so he would have overlapped with Lambert Greene for only 2 years. 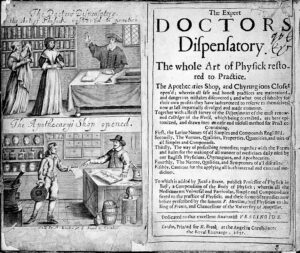 The sort of book this family might have owned, printed in 1657 about the ‘Art of Physick… Apothecaries Shop, and Chyrurgions Closet’ (see below or click image for source and acknowledgements etc., ref. Image 1).

It must be very likely through that Thomas Fraser worked with Lambert Greene for this couple of years, perhaps in a complementary role, perhaps even in the same role, just choosing different terminology to describe himself (see The history or medical treatments, training, qualifications and regulation for more on the terminology and roles). He then continued to practise in Newmarket for another 17 years until 1695. There’s a small but interesting possibility that Thomas Fraser worked with Gilman the apothecary after Lambert Greene’s death, but that’s pure speculation.

Going backwards, it’s almost certain that Francis Greene would have been apprenticed to Robert Greene the surgeon-physician (most likely his uncle, and the apparent grandfather of Lambert Greene – see the page on Francis Greene for a possible reason for the change in terminology for their role). Likewise, it’s almost certain that Robert Greene was apprenticed to Richard Greene the chirugian, who likely was his father.

Assuming all of the above is correct, the Greenes – Fraser practice chain would have run for over 100 years and in terms of dates in practice for each overlapping individual the chain of succession would have progressed follows:-

So there is good reason to believe that Newmarket was served throughout the late 16th and bulk of the 17th century by this practice of surgeon-physician-apothecary’s (i.e. the equivalent of general practitioners of medicine – old style ‘physicians’), four generations of the same family. However, it’s of note that Nicholas Searle and William Raby the barber-surgeons overlapped with the later Greenes (Francis and Lambert), so they might have performed much of the more surgical work during that period, corresponding with the Greenes describing themselves in the complementary role of apothecary. The arrival of Thomas Fraser as a member of the Greene family likely would have changed that dynamic.

Note: It’s an interesting thing that in days gone by people didn’t seem to retire, but simply continued working as long as they lived, varying between about 8 to 55 years in practice in the cases listed above. The most obvious proof of that fact from Newmarket is William Sandiver 2 who died aged 74 in 1813, but who was obviously still in practice up until his death, as evidenced by Woodward Mudd’s public notice regarding taking on his patients just 4 days after his death! Walter Norton similarly died aged 72 in 1837 whilst still working, evidenced by the fact that the Newmarket Union advertised his poor law post. Many obviously would have stopped working during a terminal illness, as appears to have been the case with Thomas Fraser and his move to Newington. Even as late as the early 20th century this appears to have been the case. Ernest Last Fyson died at the age of 73 in 1917 still in practice, as evidenced by the fact that Clement Frederick Gray took care of his patients during his terminal illness. However, Clement Gray does appear to have retired in 1926, at 80 years of age (!), living another 17 years until his death in 1943. Earlier examples of Newmarket medics who did appear to retire are Ernest Crompton in 1922 (but due to ill health), Robert Fyson in 1887, Richard Faircloth in 1878 and Thomas Searancke 1 about 1750.

Image 1: The Expert DOCTORS Dispensary, The whole Art of Physick restored to Practice. The Apothecaries Shop, and Chyrurgions Closet…, Printed for N. Brook 1657, from the Wellcome Collection; image used under CC BY 4.0, reproduced with kind permission of the Wellcome Collection. [Note: click here for the source.]

1617, 17th May: Robert Greene of Newmarket licensed to practice medicine and surgery. Reference: Register of archbishop George Abbot, volume 1, folio 201, (Lambeth Palace Library, London). [Note: see an image of this on the page about Robert Greene.]

1664: Francis Greene minted his own farthings (stamped with the apothecaries’ arms). Reference: Williamson GC. Trade Tokens issued in the seventeenth century. London: Elliot Stock; 1891;2:1095. [Note: see the page on Francis Greene for more on this and an image.]

1678, 10th May: The will of Lambert Greene of Newmarket in the county of Suffolk, apothecary. Reference: E3/10/12.2, (Suffolk County Record Office, Bury St Edmunds). [Note: there is also a copy in The National Archives, Records of the Prerogative Court of Canterbury, PROB 11/356/503.], [Note also, click here for more details.]

May P. The changing face of Newmarket 1600 – 1760. Peter May Publications; 1984. [Note: see comments regarding this and other Peter May material on The Greenes page.]

The research notes of Peter May. Reference: HD1584, (Suffolk County Record Office, Bury St Edmunds). [Note: see comments regarding this and other Peter May material on The Greenes page.]