Richard Greene has a special place in the medical history of Newmarket, since it’s quite likely that he was the first person based in the town to derive his income primarily from medical services. His practice would have spanned the latter part of the 16th and early 17th centuries, a time when the town was starting to become large enough to support a resident medic and when such medics were starting to become more widely used. Before the 17th century Newmarket was very small, probably served by visiting medics like Henry Veesy (see the page on Henry Veesys etc. for further discussion on this). 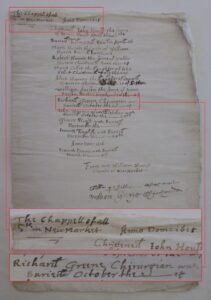 The 1615 archdeacon’s transcript of Newmarket All Saint’s showing Richard Greene’s burial (see below or click image for source and acknowledgements etc., ref. Image 1).

At Richard Greene’s death in 1615 the chapel of All Saints’ burial records show his occupation as ‘chirurgian’, meaning surgeon (see image on the right). It was very unusual for someone’s occupation to be mentioned in church records of this period, as can be seen here (he’s the only one on this sheet). So clearly his role was regarded as significant enough to merit recording, and he was seen essentially as a medic. The term ‘chirurgian’ could mean he was a barber-surgeon, but more likely he was a surgeon-(physician/apothecary), since he appears to have been the head of a family of surgeons and apothecaries who provided medical services to the population of Newmarket throughout the 17th century (see The Greenes). His apparent son Robert Greene, likely trained by Richard, was both medical and surgical, so Richard probably had a medicinal as well as surgical repertoire too. It was quite normal for medics who were essentially general medical practitioners like this to call themselves ‘surgeons’ right up until the early 20th century, and it was the usual term for them in the 19th century, hence GP surgery (see The history of medical treatments, training, qualifications and regulation for more detail on barber-surgeons, surgeon-apothecaries, use of the word ‘physician’ and the evolution of general practice etc.).

Richard Greene was probably a member of the Grene/Greene/Green family who appear to have been in Newmarket at least as far back as the 15th century (again see The Greenes for more detail). He was probably born in the 1540s – no Newmarket baptismal records survive that far back (from 1567 onwards patchy contemporary transcripts survive that were sent to the Archdeacon of Sudbury each year, like the one above, but nothing from the original registers survives before the 1630s). He would likely have been in practice from the 1560s onwards. The archdeacon’s transcripts show Robart son of Richard Grene baptised in 1569 and likewise a Thomas in 1572. So it seems Richard had two sons at least, Robert/Robart Grene/Greene (the later medic) and Thomas. It’s quite likely that Richard Greene the chirurgian was the Richard Grene junior first mentioned in the Newmarket Manorial records in 1580, later simply referred to as Richard Greene after Richard senior ceases to be mentioned (who was likely an uncle – see the Greenes). The manorial records also show a Thomas Grene/Greene from about 1595, Robert Grene/Greene from 1605 and a Lambert Greene from 1605. Given the later use of the name Lambert in the medical Greene family, it’s likely all three were sons of Richard Greene the chirurgian. He would have worked alongside his medical son Robert from about 1590 until his death in 1615. Lambert, who was a yeoman, had a brother William, also a yeoman, who lived in Little Thurlow, so perhaps Richard had four sons, although it’s possible Lambert and William were nephews not sons? (again, see The Greenes for further details).

May P. The changing face of Newmarket 1600 – 1760. Peter May Publications; 1984. [Note: see comments regarding this and other Peter May material on The Greenes page.]

Mortimer I. Introduction. A Directory of Medical Personnel Qualified and Practising in the Diocese of Canterbury, circa 1560-1730. PAPER No. 021. http://www.kentarchaeology.ac/authors/021.pdf (accessed 10th January 2015).

The research notes of Peter May. Reference: HD1584, (Suffolk County Record Office, Bury St Edmunds). [Note: see comments regarding this and other Peter May material on The Greenes page.]