Gilman the apothecary is notable for a couple of things:-

First, we don’t know his first name! The only mention of Gilman unearthed to date comes from the Newmarket manorial records. The Court Baron proceedings for 15th May 1695 show the transfer of a shop in Drapery Row from a William Kendall (on his death) to his son (also named William Kendall). Since the younger William Kendall was under age, his uncle Ambrose Friend was appointed guardian of the shop. The record also mentions that the shop was ‘occupacone             Gilman Apothecae’, i.e. occupied (presumably rented) by Gilman the apothecary. The space in the quote is deliberate – it’s in the original court Latin (see image below). Gilman himself must have been absent from the hearing on that day and no-one present knew his first name. A space was left, presumably so that it could be filled in later, but it never was! Those in the room, and perhaps many others in town, obviously knew him simply as ‘Gilman the apothecary’ – a bit like many medics today are known as Dr Whoever, and perhaps many patients etc. don’t know their first names.

Gilman the apothecary (Gilman Apothecae) mentioned at ‘Drapery Rowe’ in the 1695 Newmarket manorial records (see below or click image for source and acknowledgements etc., ref. Image 1).

Second, he is the earliest Newmarket medic with a known location for his premises – Drapery Row. This ‘road’ still exists, running between Market Street and Wellington Street, past the Bushell, now essentially a back service road that lies behind that part of The Guineas shopping centre fronting onto the market square. The Guineas used to be called The Rookery shopping centre until 2010, named after The Rookery area of town, a name associated with that part of Newmarket at least as far back as the early 19th century (it appears on the 1841 census and in the Newmarket Union minutes of 1836). So Gilman’s apothecary shop could perhaps be regarded as an early medical centre in The Rookery – three centuries before The Rookery Medical Centre of today was built! 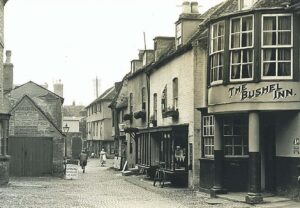 An old photograph of Drapery Row, obviously from well after the 17th century, but some elements of the scene perhaps giving an impression of what the street might have looked like in Gilman’s time (see below or click image for source and acknowledgements etc., ref. Image 2).

Note: It seems likely that Gilman was related to Charles Gilman an apothecary in Cambridge at this time. It’s possible even that the Newmarket Gilman was Charles Gilman the Cambridge apothecary with a branch of his business in Newmarket, like that proposed for Henry Veesy 200 years earlier. However, Charles Gilman’s will gives no clues regarding Newmarket connections, but does give him the interesting job description ‘Pharmacopola’ as well as using the more usual ‘apothecary’.

Image 1: The 1695 Newmarket manorial records, reference 359/10, pg 68 (cropped – red annotations mine); image ©, reproduced with kind permission of the Suffolk Record Office, Bury St Edmunds and… [Note: it’s not been possible to make contact with the successor organisation to the depositor of this record. Nevertheless, it’s felt appropriate to use an image here of this small extract, given that it’s of such relevance to the page, and the nature of the website more generally. See the note below and please make contact if appropriate.]

1836, 10th May: The parish of Newmarket St Mary as part of the Newmarket Union applied to the poor law commissioners to sell various properties, including, ‘two double cottages situate in the Rookery or Diddery’. Reference: an image of the original document in the research notes of Peter May, HD1584, (Suffolk County Record Office, Bury St Edmunds), which he appears to have obtained from the National Archives at Kew, referencing it as PRO (Kew) MH12/1684.

Shops History Newmarket. The Rookery (now The Guineas Shopping Centre). http://www.newmarketshops.info/The_Rookery.html#Map (accessed 29th November 2014). [Note: see this website for further details regarding the wider history of The Rookery area of town.], [Note also, newmarketshops.info has been supplied with information regarding the medical history of Newmarket by the author of talkingdust.net since August 2013 (see footnotes on some of the pages). Both websites continue to be developed, and in this sense are mutually symbiotic.]

The will of Charles Gillman 1704 (probate 1722 – note Whittet below mistakenly dates this 1726). Reference: VCCt.wills;IV,380-381, (Cambridge University Library). [Note: his will does use the ‘ll’ spelling as the headline spelling, but later in the will Gilman is used.]