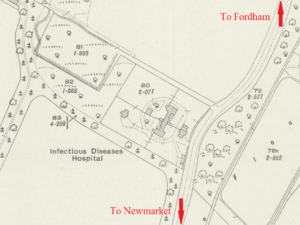 The Fever Hospital shown on the 1926 OS map as ‘Infectious Diseases Hospital’; it was also known as the Exning Isolation Hospital, and was about 2 miles north of Newmarket town centre, just the other side of the A14 today, up Fordham Road (see below or click image for source and acknowledgements etc., ref. Image 1).

The Fever Hospital up Fordham Road opened in 1889, where Beech House Hospital was until a few years ago, a location which even now is situated well out of town (technically it’s in the parish of Exning). Initially it had 10 beds, but by 1915 there were 14, then 24 beds were being mentioned by 1935. It first appears in the Medical Directory in 1950, when they introduced a new section called ‘Hospitals Under the Regional Hospital Boards’ – before that hospitals had been listed under counties and the Fever Hospital was not listed for some reason, in neither the Cambridgeshire nor Suffolk hospitals sections. Then in 1950 the directory listed it under the No. 4 Area, East Anglian Regional Hospital Board, as Exning Isolation Hospital, Newmarket, Cambs., with 30 beds. In 1955 the beds increased to 34, but reduced to 21 for the last two years that it’s listed, in 1963 and 1964.

The earliest known example of a possible fever hospital in Newmarket is ‘Dr Searancke’s Lazaretto’ in 1768, although that might have been a smallpox inoculation house, or more specifically used just for quarantine (see the page on Thomas Searancke 2 for details). Interestingly, the Newmarket Union poor law minutes mention a pop-up fever hospital in Stetchworth in 1847, provided for ‘paupers’ during a fever outbreak in the village that time. Perhaps the same sort of thing happened in other villages at other times. However, by 1842 there were already in place separate contagious wards at the workhouse infirmary (shown on a plan – see an image on the page about Newmarket Hospital). So interestingly it seems likely that hospital provision was better for the poor with infectious diseases in the early to mid 19th century, with other members of society likely enjoying personal attendance in their homes instead. Perhaps that’s partly why the workhouse infirmary continued to maintain its own contagious wards for the poor after the fever hospital opened. Presumably patients paid for treatment at the fever hospital via one means or another*, as implied by a newspaper report from 1896 stating that during a Lidgate scarlet fever outbreak only ‘two families availed themselves of the benefits of the Fever Hospital’. Later, a newspaper report from 1935 implies that perhaps the local authorities bore the cost, but that might not have been for all patients (the council had taken on the poor law functions by that stage, and things were evolving – see the page on the Newmarket Union). Obviously post 1948 the fever hospital would have been part of the NHS.

It seems that medical cover for the hospital was provided by the Grays’ practice, in that when Clement Gray died in 1943 the Newmarket Journal reported that he’d been ‘medical officer for the Newmarket Isolation Hos-pital from the date of its open-ing until he was succeeded in that office, several years ago, by one of his sons, Dr. Norman Gray’. This fits with the Kelly’s Directory entries from 1922 and 1937 below, which refer to Clement Gray then Norman Gray as the Medical Officer.

It seems likely that the hospital was used specifically for acute infectious cases until 1958. Certainly in the early 2000s I had a patient who remembered being in the fever hospital as a child during the 1930s or 40s (I think she said with scarlet fever), admitted by Dr Jimmy McNeill, during the time of Norman Gray from the same practice (incidentally, it’s of note that I knew this patient from The Rookery Medical Centre, but she’d been a patient of the practice since a child, when it was at Alton House; Jimmy McNeill was one of those who moved the practice from Alton House to The Rookery in 1974 – see The Rookery Practice chain).

According to Dick Heasman’s book on Newmarket Hospital, the fever hospital was used as a medicine for the elderly unit for a short time before closing completely in 1963. The Medical Directory from 1959 onwards records the word ‘chronic’ in the hospital’s entry, likely reflecting that change from acute cases to longer stay medicine for the elderly patients. However, the directory implies that it remained open until 1964, as mentioned above, reducing from 34 to 21 beds in 1963 (possibly the directory was just slow to pick up its closure, the reduction to 21 beds in 1963 being part of the closing down, which Dick Heasman specifies as the end of August 1963 – he was there when it happened, assistant secretary to Newmarket Hospital at that time).

As mentioned above, more recently the site was re-developed as Beech House Hospital, a private care home for patients with mental health problems requiring secure accommodation – which has now closed.

* There were various insurance schemes such as the Newmarket Provident Society and self-aiding Medical Club – see the page on Richard Faircloth for more on that club, with which he was involved, and also the 1840 reference on the page about the Newmarket Union, a page which also mentions the role of National Insurance from 1911 onwards (see the last paragraph there).

1768: On Chapman’s 1768 map of Newmarket, ‘Dr Searancke’s Lazaretto’ is marked in open fields on the north side of what’s now Exeter Road. Reference: Online image from The British Library at www.flickr.com of Maps K.Top.8.74., ‘To The Right Honourable WILLIAM EARL of MARCH & RUGLEN, Baron Douglas of Nidpath, Lymn & Maner, Vice Admiral of Scotland, one of the Lords of his MAJESTYS [sic] Bed Chamber; Knight of the Most Ancient & Noble Order of the Thistle &c. &c. THIS PLAN OF NEWMARKET, IS HUMBLY INSCRIBED By his Lordship’s Most Humble & Obedient Servant I. Chapman.’ (accessed March 2021). [Note: see the page on Thomas Searancke 2 for more details and an image.]

1842: Separate contagious wards shown on a plan of the workhouse site. Reference: ADA500/33, (Suffolk County Record Office, Bury St Edmunds). [Note: see an image of this on the page about Newmarket Hospital.]

1847, 23rd February: ‘Upon the Medical Officer of the parish of Stetchworth stating that a fever raged in the parish and recommending a Hospital to be provided for the patients to prevent its spreading… it was resolved that a temporary Hospital be provided… for the paupers affected with fever, and… the Relieving Officer was ordered to find a proper Building for that purpose.’ Reference: 611/17, Newmarket Union minutes, (Suffolk County Record Office, Bury St Edmunds). [Note: not surprisingly, the minutes record quite a lot of relief being given to the people of Stetchworth with a diagnosis of fever during this period.]

1853, 18th March: Richard Faircloth the workhouse medical officer submitted a letter to the Newmarket Union including the statement, ‘The number of sick and infirm persons admitted into the House having largely increased within the last 2 or 3 years renders it necessary to enlarge the Hospital & infirm Wards, taking care to retain the command of the Contagious Wards, in case of anything like an epidemic infectious disease breaking out. Reference: 611/19, Newmarket Union minutes, (Suffolk County Record Office, Bury St Edmunds).

1892: The introductory section to Newmarket in the 1892 Kelly’s Directory states ‘The Fever Hospital, in Fordham road, was erected in 1889 and contains ten beds.’ Reference: Kelly’s Directory of Cambridgeshire. London: Kelly & Co. Limited; 1892, pg 127.

1896, 19th September: Under the heading ‘LIDGATE’ ‘SCARLET FEVER.– The village has been quite free from the fever for some weeks now. Some of the cases were very severe… Only two families availed themselves of the benefits of the Fever Hospital, Newmarket, three cases going from one family and two from another. One young woman… died at the hospital, dropsy having set in, and a young man… had returned home but a day or two when he contracted rheumatic fever, and has been an invalid ever since.’ Reference: The Bury Free Press. Saturday Sept 19 1896: 3.

1903, 11th August: ‘In view of the present epidemic of Small Pox in the District and the fact that the Isolation wards at the workhouse having been removed to make room for the new Buildings, it was proposed… and unanimously resolved as a matter of extreme urgency that an Iron building be either hired or purchased for the Isolation of any cases of infectious disease which may occur in the workhouse’. Reference: 611/39, Newmarket Union minutes, (Suffolk County Record Office, Bury St Edmunds). [Note: it’s interesting that they provided this facility rather than use the Exning fever hospital, which obviously therefore was not for the poor at this stage.]

1915, 19th November: A larger report on the health of Cambridgeshire mentioned, ‘The joint Isola-tion Hospital shared by Newmarket Rural pro-vides 14 beds for Newmarket, which experience showed was insufficient to meet epidemic re-quirements adequately. Plans for additional accommodation had been considered by the Joint Committee, but the matter had not yet been proceeded with. There is no steam disin-fector and no accommodation for small-pox.’ Reference: The Cambridge Independent Press. Friday Nov 19 1915: 7. [Note: see 1935 below, which mentions 24 beds.]

1935, 29th June: A larger report on the health of the Clare Rural District mentioned, in relation to isolation hospital accommodation, ‘“There is no hos-pital in the Clare Rural District,… Under ordinary circumstances, however, cases can be sent to the New-market and Moulton joint Isolation Hos-pital at Exning, near Newmarket, the charge being £2 12s. 6d. a week, plus the cost of removal by motor ambulance. It should be remem-bered, however, that there are only 24 beds at this hospital, and that the New-market Rural District, in the County of Cambridge, has the first call on the available accommodation.”’ Reference: The Bury Free Press. Saturday Jun 29 1935: 14. [Note: interestingly this part of Fordham Road is in the parish of Exning; see the 1923 advert above also.]

1943, 16th January: ‘Death of Dr. C. F. Gray… He was… medical officer for the Newmarket Isolation Hos-pital from the date of its open-ing until he was succeeded in that office, several years ago, by one of his sons, Dr. Norman Gray…’ Reference: The Newmarket Journal. Saturday Jan 23 1943: 7. [Note: see the page on Clement Frederick Gray for more details from this reference.]

Heasman D. 160 years of service to the community. A history of Newmarket General Hospital. Mid Anglia Community Health NHS Trust; 1996. [Note: this book has a paragraph about the fever hospital on page 21, calling it ‘The Exning Isolation Hospital’, including the comment that for a short period it was used as a ‘geriatric unit’ rather than infectious diseases facility, before closing in the summer of 1963.]

Personal discussion with an elderly patient of mine who recalled being ‘put in the fever hospital up Fordham Road by Jimmy McNeill’ as a young girl.

Personal experience of visiting the hospital to address general practice type issues for the mental health patients there, when a registrar at Orchard House Surgery. Beech House was covered for such things by that practice.