It’s interesting to consider what impact the arrival of the royal court had on the medical scene in Newmarket. It’s likely the medics who accompanied the royal household remained entirely separate, treating just the royal household, but they might well have been involved with some of the nobles attracted to the town alongside the royals. Likewise, it’s unlikely that Newmarket’s resident medics (the Greenes) played any role in treating the royal household, but this new development in town might partly be what prompted the apparently 47 year old Robert Greene to gain a licence to practice in 1617, and Francis Greene to call himself an apothecary (see the pages on these individuals for more discussion on that, and The history of medical treatments, training, qualifications and regulation for more on the terms physician, chirurgian/surgeon and apothecary). 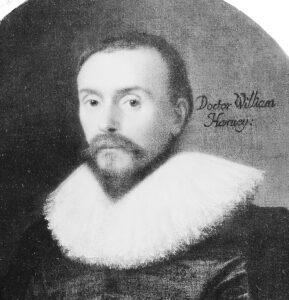 A portrait of William Harvey (see below or click image for source and acknowledgements etc., ref. Image 1).

When James I passed through and discovered the Newmarket area in 1605 (note this was their February 1604, our 1605 – see New Year change) he was accompanied by a medic described at the time by the Earl of Worcester as the king’s chief physician (but in fact thought to be his chief chirurgian Gilbert Primrose). Others are mentioned at different times accompanying the royal court to Newmarket as well, such as the Scottish physician David Beaton in 1634 (interestingly the Beatons in Scotland were particularly associated with medicine, for hundreds of years). In 1614 a physician from Cambridge was called in when the king had a fall from his horse – see the page on George Bor(th)wick Mead for this reference, who was the first Newmarket medic to write about this historical fact, in 1863/4.

However, the most significant royal court physician to visit Newmarket was William Harvey, who we know was in the town for several weeks during the autumn of 1632 at least, as physician to King Charles I. William Harvey is famous for having discovered the circulation of blood. He was a university educated physician, having studied at Cambridge, then Padua in Italy (a leading centre for medical education at the time). After his return to England Harvey became a fellow of the Royal College of Physicians in London, Physician to St Bartholomew’s Hospital, and a lecturer in anatomy – in which he had a keen interest (and in effect in physiology too). His first royal appointment was to King James I in 1618, so he might well have visited Newmarket with the royal household any time after that. Evidence from his anatomy lectures in London shows that he was already formulating ideas about the circulation of blood at that stage, but it was not until 1628 that he published his famous work on the subject: De motu cordis et sanguinis = on the motion of the heart and blood. Part of his argument included demonstrating the circulation of blood in the arm (see an image below left). His description of this includes the interesting remark, ‘the best subject for it being one who is lean, and who has large veins, and the best time after exercise, when the body is warm, the pulse full, and the blood carried in larger quantity to the extremities, for then all is more conspicuous’. I wonder whether he’d spent some time in Newmarket reflecting on this, observing jockeys after races – lean and after exercise? JP Hore suggests that it was in Newmarket, some years before 1632, that Harvey had perfected his discovery, but the basis for this opinion is not clear. 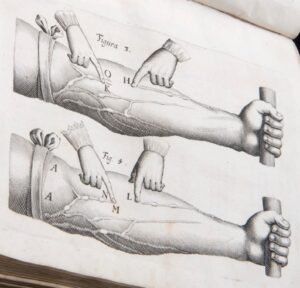 A page from De Motu Cordis demonstrating some of the observations underlying Harvey’s ideas (see below or click image for source and acknowledgements etc., ref. Image 2).

Consistent with the stricter demarcation between physician and apothecary that prevailed in the capital, during the 1632 trip Harvey the physician worked alongside an apothecary to the royal household named ‘John Wolfe Rumbr’ (presumably John Wolfgang Rumler as he’s described elsewhere). He was reimbursed ‘for divers parcells of Phisicall Drugs and Odoriferous Pfumes’ – phisicall presumably meaning pertaining to ‘physic’ i.e. the practice of a physician. It’s not clear whether the odoriferous pfumes were medicinal or other*, but certainly an apothecary’s shop would have been very ‘odoriferous’. As late as the early 20th century the following description of a pharmacy was made by Bulgakov: ‘it was supplied with every conceivable medicine. Its two sombre rooms smelled strongly of herbs and its shelves were filled with an endless supply of preparations.’

As often is the case with those who challenge established majority views, William Harvey didn’t have an easy ride, as the following thought provoking quote from towards the end of his life shows: ‘who should recommend me to quit the peaceful haven where I now pass my life and launch again upon the faithless sea? You know full well what storm my former lucubrations raised. Much better is it oftentimes to grow wise at home and in private, than by publishing what you have amassed with infinite labour, to stir up tempests that may rob you of peace and quiet for the rest of your days’. Fortunately he was persuaded to publish his latest work, despite these reservations.

It would be interesting to know whether any of the Greenes met William Harvey during his time in Newmarket, and discussed with him the circulation of blood! If so, it certainly would have been an encounter they’d remember for the rest of their days. In 1632, when William Harvey was definitely in Newmarket for several weeks, he would have been newly famous/infamous for his 1628 publication. Robert Greene would have been 63 years old, a licensed but not university educated local chirurgian-physician (i.e. generalist medic). Francis Greene would most likely have been a young boy, perhaps not quite old enough to be an apprentice yet? Nicholas Searle the barber-surgeon would likely also have been in practice at that time. Perhaps their very different backgrounds and roles would have made such an encounter unlikely though.

Later in the medical history of Newmarket a local medic did treat a member of the royal family at the races in 1786 (The prince of Wales – later George IV), and a cousin also described him as medical attendant to the Prince Regent, implying that this was more than a one off event (see the page on William Sandiver 2 for more, and references). In the 19th century William Henry Day, further down The Rookery practice chain, had a ‘nobleman’ patient who he treated for stomach ache in Newmarket then later followed up in London. There have even been similar 21st century examples!

* they may well have been ‘other’ – just like a modern chemist’s shop dealing in medicines and other products including perfumes. It’s of interest that the 1611 King James Bible (same century) uses the word apothecary to describe a perfumer i.e. the person making holy incense: ‘thou shalt make it a perfume, a confection after the art of the apothecary’ (Exodus 30:35).

Image 2: A copy of ‘De Motu Cordis’, by William Harvey, Frankfurt, Germany, 1628, from the Science Museum, London (cropped); image used under CC BY 4.0, reproduced with kind permission of the Science Museum and Wellcome Collection. [Note: click here for the source.]

Some sources consulted include:-

Mitchell R. Celtic medicine in Scotland. http://www.rcpe.ac.uk/library-archives/celtic-medicine-scotland (accessed 20th December 2014). [Note: aside from the Beatons, this is very interesting on the history of early Scottish medicine in general, which was not unlike the situation in the more provincial areas of England, like Newmarket, and that with the more ancient physicians – see The history of medical treatments, training, qualifications and regulation.]

Willis W. The works of William Harvey, M.D… translated from the Latin with a life of the author. London: Printed for the Sydenham Society; 1847. [Note: source for the quote from De motu cordis et sanguinis above, pg 55-56.]