The First World War military hospitals in Newmarket town itself were Sussex Lodge and Severals House. There was also The Cheveley Park Hospital. This was in what’s still called Cheveley Park today, on the road east out of Cheveley on the way to Newmarket’s Duchess Drive, on the right hand side. It had 60 beds, taking patients directly from the trenches. Dr Norman Gray worked there, although he was abroad for some of the war (see the page on Norman Gray for details). Sussex Lodge is along a small lane off Fordham Road, on the left just past St Louis’ School. Severals House was where ‘The Severals’ flats are now, along a small lane off the bottom of Bury Road, on the left.

Note: during the Second World War the old workhouse with infirmary up Exning Road was transformed into White Lodge Emergency Hospital, which evolved into Newmarket General Hospital after the war – see the page on Newmarket Hospital for details. 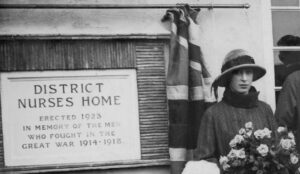 Princess Mary, daughter of George V, at what was presumably the opening of the Cardigan Street District Nurses Home in 1923 (see left for source and acknowledgements etc., ref. Image 1).

The Cardigan Street District Nursing Home was built in 1923 as a memorial to the First World War, but has since closed down. At least part of its role was as a maternity hospital.

1915, 1st August: At an annual parade at Burwell in aid of Addenbrooke’s Hospital it was reported that ‘four wounded soldiers from the Sussex Lodge Hospital, Newmarket’ were in the parade. Reference: The Cambridge Independent Press. Friday Aug 6 1915: 7.

1915, 13th November: A wedding that took place at Cheveley was reported in the press for which ‘Owing to the fact that the bride has been a nurse at the Cheveley Park Hos-pital and the bridegroom a patient, the wedding was attended by the matron (Lady Saville Crossley), Dr. Norman Gray, the sisters, nurses, and as many of the patients as were able to be present; also the indoor staff at the hospital. As the bride and bridegroom left the Church the wounded formed a guard of honour.’ Reference: The Bury Free Press. Saturday Nov 13 1915: 2.

1916, 16th June: A tribunal regarding exemptions to military service was reported in the press. Under the heading ‘CHEVELEY PARK HOSPITAL’ an orderly was exempted as they ‘had only two able-bodied men… Cheve-ley Park was now made a primary hospital, and they got men directly from the trenches, which made it doubly hard on the orderlies. They had 60 beds.’ Reference: Cambridge Independent Press. Friday Jun 16 1916: 6. [Note: at a similar tribunal in 1917 someone who had been rejected by the army but made ‘use-ful at the hospital, to drive the ambulance motor’ said ‘they had 60 patients at the Cheveley Park Hospital’ and he ‘was being treated for rheumatism by Dr. Gray’. Reference: Cambridge Daily News. Wednesday Mar 21 1917: 4.]

1939, 24th July: Under the heading ‘A Happy Party at Newmarket’ a photograph with the caption ‘The garden of the Nursing Home, Cardigan Street, Newmarket, was the setting for a very enjoyable party on Monday afternoon, when about thirty mothers, with their babies, were entertained to tea by the Matron (Miss Varney) and Nurse Lawson. The mothers present had all been patients at the Home since Miss Varney took up her duties some months ago…’ Reference: Bury Free Press. Saturday Jul 29 1939: 5.

Personal correspondence with Tony Pringle of the Newmarket Local History Society and the www.undyingmemory.net website.

Shops History Newmarket. Severals House. http://www.newmarketshops.info/Severals_House.html (accessed 12th October 2018). [Note: this website has a photograph with original caption ‘Patients of Severals House Hospital, Newmarket, England. / The group includes a number of Australians and Canadians, besides men of several English and Welsh regiments, the hospital being one of the most cosmopolitan in England.’]