Back to the page on Richard Faircloth, Frederick Page, Robert James Peck, or Referral hospitals.

‘PAINLESS OPERATION UNDER THE INFLUENCE OF ÆTHER 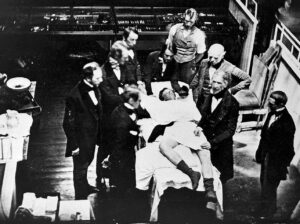 An operation under ether anaesthetic in 1847, the same year as this Bury St Edmund’s operation, so likely a similar scene (see below or click image for source and acknowledgements etc., ref. Image 1).

Yesterday, a large assemblage of the professional gentlemen of this vicinity took place at the Suffolk General Hospital, to witness the operation of removing a tumour from the breast of a female, while under the influence of the vapour of æther. Besides the medical staff of the Hospital, we noticed Messrs. Cream, Kilner, and Coe, of Bury; Messrs. Peck, Faircloth, and Page, of Newmarket; Mr. Kent, of Walsham; Messrs. Bree, of Stowmarket; Slater, of Woolpit; Barsham, of Norton; Robinson and Aldrich, of Mildenhall; Harris, of Botes-dale; Cream and Jones, of Melford; Martin, of Clare; Barker and Scott, of Barrow; Greene, of Ixworth, &c., &c., &c.

Some difficulty was experienced in bringing the patient fully under the influence of the æther; but this was at length effected, and she was laid back on the pillows in a state of complete insensibility. The operation was then commenced, and the tumour, about the size of an orange, was rapidly removed by Mr Image, the patient making only an indistinct moaning noise. As some dissection was necessary in order to separate the diseased part, the woman had a second application of the inhaler, so that the insensibility was maintained as long as was required. And now came the most interesting part of the procedure. A towel having been laid over the bosom, so as to conceal the effects of the operation, and the patient having re-covered her senses, Dr. Ranking asked her how she felt, and whether she was now ready to undergo the operation. She replied that she was quite resigned and willing; that she knew that it must be painful, but that Mr. Image might commence as soon as he liked. This answer was elicited from her several times by Dr. Ranking, that the spectators might have full opportunity of ascertaining that she was perfectly unaware of any operation having been performed. Dr. Ranking then informed her that the tumour had already been removed, and that nothing more was to be done, upon which her countenance put on an expression of delighted and grateful astonishment which it is impossible to depict. In fact, she appeared quite incredulous, until she had raised her head, and herself inspected the wound, when she could not suffi-ciently thank those around her for having been spared an amount of suffering which she had justly supposed would, under ordinary circumstances, have been extreme.

Nothing could, in the estimation of the majority pre-sent, have been more demonstrative of the power of this agent than the present case. It was one which required careful dissection, and was not therefore so rapid as others. The expression of willingness to submit to the supposed impending operation was genuine, as were also the incredulity and subsequent gratitude. The woman has since positively declared that “she felt nothing, but was in a dream, and taken away from the present world.” Her pulse and general aspect were not like those of a person who had had so large a portion of the body excised.

The application was tried last week, by Mr. Smith, at the Hospital, in a severe case of cancer on the lip, but the symptoms of congestion of the brain were so apparent, that he thought it more prudent to delay the operation. Several successful cases of extraction of teeth have been performed at the same institution, under the influence of the vapour; and it has been repeatedly tried upon a medical student, for the purpose of showing the insensi-bility to pain which it produces, and the general harmlessness of its operation under proper hands.’